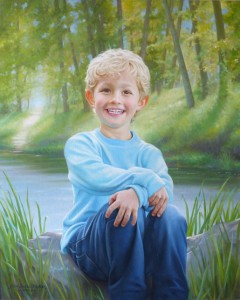 My goal as an artist with this portrait was to record for posterity not only an accurate likeness, but also the shining young personality and life of five year old Nathan O’Brien.

Capturing the spirit and likeness of such a beautiful and happy young child taken from this world at such an early age could never be an easy task.  Every posthumous portrait project is full of special challenges, beginning with the need to cobble together workable images and information of a suitable quality where one then has good options to use for creating a work of art.

My primary reference for this portrait was one particular digital photo of a high enough quality to work from that showed Nathan in a very casual pose ebulliently happy during a day when he was out in nature with his family.  In fact, one could even say that he had an angelic glow as the sunlight streamed down directly upon him – and also seemingly from him.

I chose to take that special image and combine it with a setting inspired from a photo of his whole family together from that same spring day out in the woods with a stream in the background.  Those, and other choices, serve as metaphors for the portrait.  The season of springtime is depicted symbolizing Nathan’s youth and innocence.  The inclusion of a river also has special significance.  Whether one looks at Greek mythology, Christian stories, or Confucius, the river symbolizes everything from the death of sin and passing into new life to dying and crossing into heaven – or simply, the passing of time and life itself.  Writers such as Tolkien and C.S. Lewis put heaven across the water, and so the water in the portrait is also a metaphor for that, as is the beautiful pathway on the banks across the river that leads up into the light. Overall, this is a portrait depicting a young boy taken from the world too soon, but also a painting with a continuing vision for that boy’s spirit and purpose.

As I have worked on Nathan’s canvas, I have smiled back at his beaming angelic face many a day, and can only hope now that this portrait will provide all who gaze upon it with a chance to smile back, remember Nathan’s joy, and celebrate all of the happiness he willingly gave to others.