Portrait of Frank Dowd, IV, Chairman of the Board, Charlotte Pipe and Foundry

When I was contacted by Roddey Dowd, Jr. regarding my painting his portrait, and also that of his cousin, Frank, for Charlotte Pipe and Foundry’s substantial art collection, I was immediately excited about the artistic possibilities for capturing each of them in a portrait that could depict their day to day world. Both Roddey and Frank are very hands on fourth generation family members who have continued to extend the growth and accomplishments of this privately held American manufacturing company into the 21st century. These new portraits maintain a long tradition of honoring the hard earned leadership positions of Charlotte Pipe and Foundry, which remains a company on the forefront nationally and internationally in the manufacture of cast iron and extruded plastic pipe products and fittings.

My task was to create two distinct portraits which would scale well with those earlier paintings of the previous generation – in particular, the most recent portraits painted by Mississippi artist, Marshall Bouldin. These new portraits needed to be three-quarter length paintings painted at approximately 3⁄4 life-size in scale. 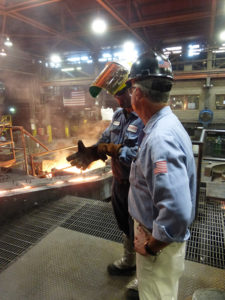 Upon first meeting with Roddey, we discussed my visit to their main foundry location in Charlotte. I soon began envisioning a portrait that might somehow include the atmosphere of the manufacturing operation and the predominant glow of the molten iron found within. Our tour of this property and my education on the processes of manufacture in America led to an understanding that the foundry itself and its American flag should very much be depicted in one of this generation’s new portraits, as yet another embodiment of the company and all that it represents. Likewise, Frank is depicted in his attractive office at company headquarters shown handling the many aspects of successful day to day operations.

In Roddey’s portrait, I have depicted the glow of the molten iron as it passes on its way to the large bull ladle along with the thick atmosphere this creates, all of which is enhanced by the light of the clerestory windows. There is a figure in the control room at work, representing the many employees of the company and their contribution. Roddey’s gesture and expression is one of confidence and pride in all that the company embodies: manufacturing a quality product in America, engaging with and employing numerous people, while always meeting or exceeding very rigorous EPA standards.

I first met Frank in his office while he was working at his uniquely handcrafted standing desk. His relaxed, open and engaging manner was quickly apparent and it is that quality I most sought to capture in his portrait while depicting him casually turning away from his work and offering the viewer a greeting. This spontaneous gesture had him place four fingers down upon the stool behind him, perfectly representing the IV after his name! On the desk there is a model of one of the company’s corporate jets, along with a small cast iron figure of a man ladling flowing iron into a vessel. The framed print on the wall behind him honors the generous legacy of four generations of the Dowd family in Charotte in support of the YMCA, whose oldest and primary Charlotte location is named after the family.

It is my hope that each of these portraits will serve to record the combined contributions and achievements of both Roddey and Frank, while also serving to inspire the generations of company leadership to come. Both portraits are 42 x 30 inches, oil on linen, and can be found hanging in the corporate offices of Charlotte Pipe and Foundry, Inc. on Randolph Road.