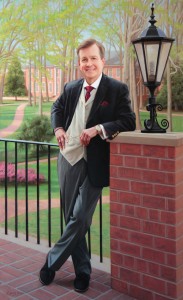 The conception for my portrait of Kent developed initially out of the preference he had for being depicted in an outdoor springtime setting on the beautiful campus of Guilford College in Greensboro, NC.  Several earlier portraits in the college’s collection have shown past presidents in outdoor scenes.  This conception had not only precedent, but also special significance in this instance, considering all of the improvements to the campus initiated by Kent.  The smaller than life-size dimension chosen for the portrait was also based on precedent, as several of the other portraits in the college’s collection are of that size and we wanted an overall size that would work most optimally for the college’s portrait gallery.

During my visits to Guilford, Kent and I toured the campus discussing sites and backgrounds that might work for his portrait. It became clear that, other than his very personal and friendly rapport with the entire student body, one of the significant accomplishments of his tenure at the college had been the many modernizations to the existing buildings and campus infrastructure. I chose to depict the new energy saving CFL lightbulb in the lamp beside him as a point of reference recognizing this role as a modernizing figure. Something as simple as a lightbulb will actually serve as a date for his tenure as president, and also for this portrait in the years to come!

The thought to show Kent on the new terrace of one such expanded building with a view of the classic Greek pediment and columns of the library behind him has significance. The use of the Hege Library in view suggests the world of academia and also the sense of tradition embodied in the college’s history that is being maintained.   I wanted to depict a portrait of not only the man, but also his place in the special history of the college as it honors and blends the beauty of the past with its vision for the future.

Kent had chosen distinct attire for the portrait, something very much in keeping with his day to day style.  I noted that the dark jacket, grey slacks, and vest would be complimented by the black iron railing and lamp seen on this same terrace and that the brickwork on the terrace, paths, and distant buildings would all be an attractive balance to the lacy spring foliage that surrounds him. We tried many different variations in pose, posture and angles within this setting, and through this process we found a gesture that was truly natural and expressive of his engaging and open personality.  As we worked and chatted, his expression and enthusiasm for life at Guilford was apparent and I strove to capture the twinkle in his eye at that moment.

Creating a successful work of art while working outdoors offers its own special set of challenges and the pieces of the puzzle within those rectangular borders must all work well together.  A center of interest, balance, harmony, and rhythm must all be achieved.  One addition to the composition which added to that was the inclusion of the azaleas in the mid-ground of the painting. Many bushes had yet to be planted around the campus or were yet to bloom when the sittings occurred.  Kent asked that I invent some azaleas of a particular color for the scene where none yet existed and so the special  “John Walker Azaleas” in the portrait were later planted as reality following art!

To know Kent is to appreciate a man blessed with both intelligence and wit combined with style and vision.  It is my sincere hope that I have captured all of the above to the fullest measure.