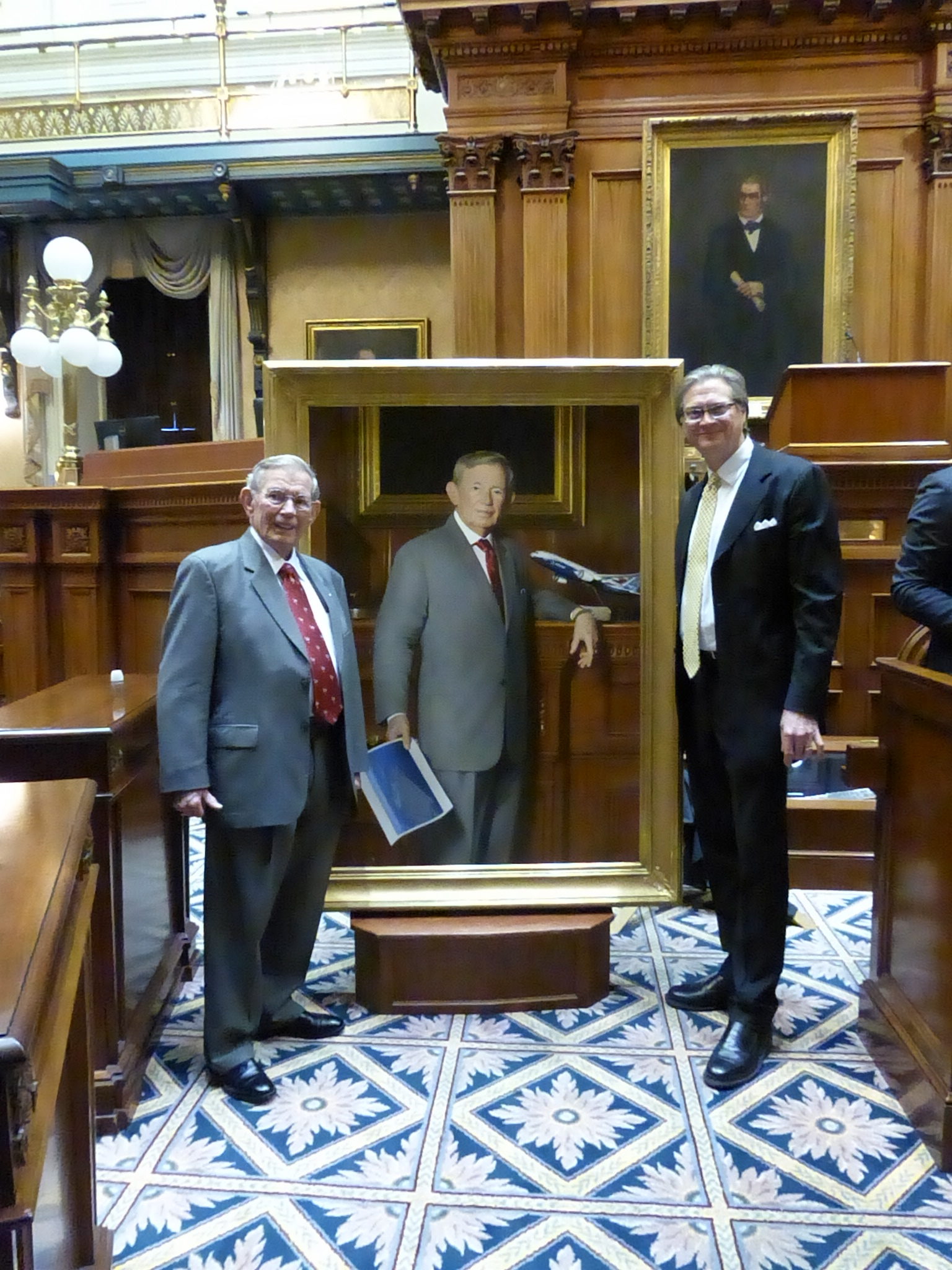 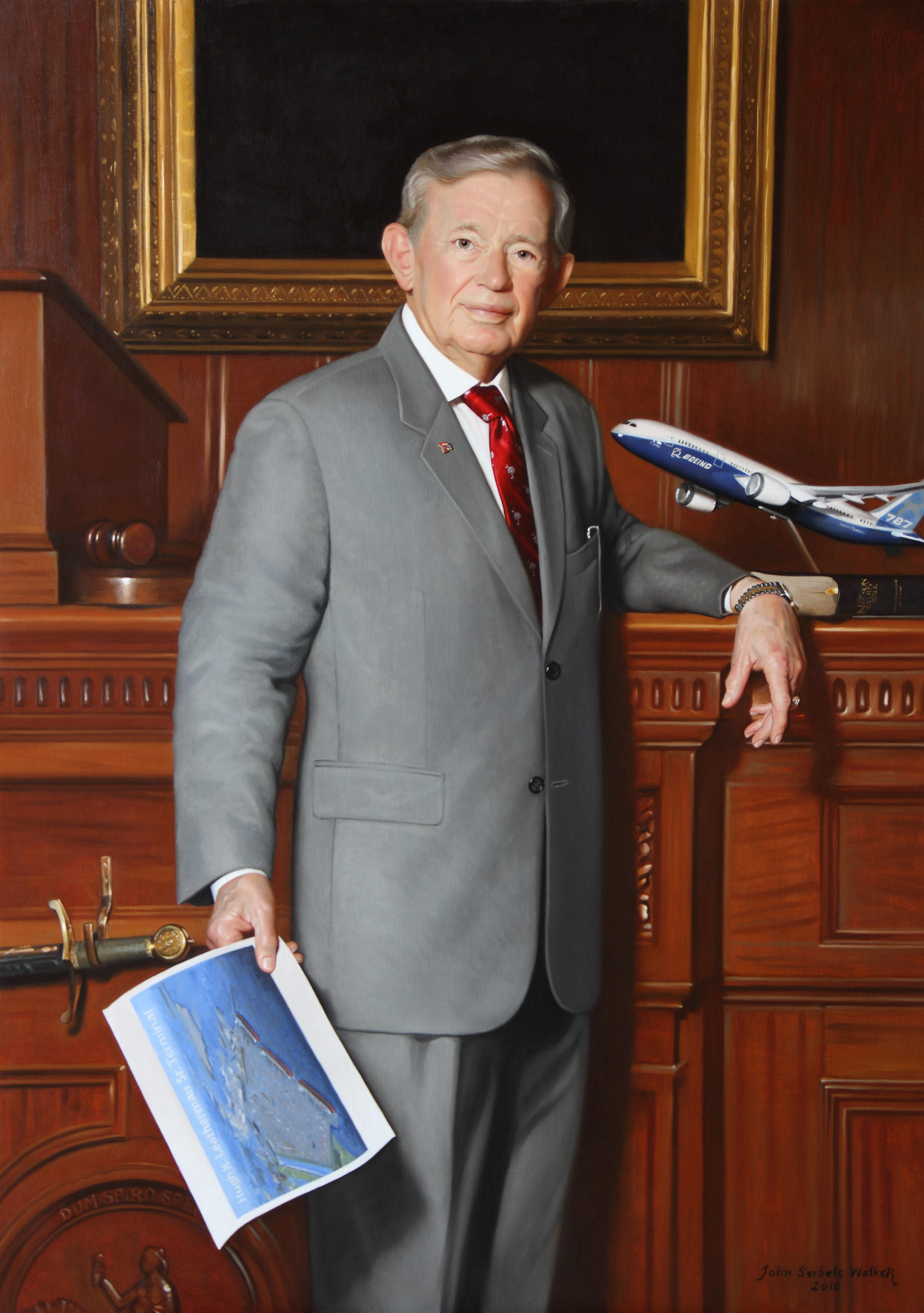 Dum Spiro Spero, latin for “while I breathe, I hope”.  The beautiful state motto of South Carolina.

These were the words that most struck me in the fall of 2016 while working with Senator Hugh Leatherman on his official portrait to hang in the Senate Chamber of the State House of South Carolina.  I immediately knew it was that very spirit I most wanted to capture while painting him.

Upon first meeting Senator Leatherman, he described to me his wish for a portrait that could tell his unique story and represent his steadfast desire over his many years as a public servant to leave the state of South Carolina in a better place.  Our conversation frequently turned to his background as a builder, not only in the concrete and construction industry, but also as a builder of relationships.

One will find in the portrait two major examples of these skills put to work:  The first is a rendering of the new Ports Authority Terminal in Charleston, which is named in his honor and the second is a model of a Boeing 787 Dreamliner, representing his critical role in the Boeing Aircraft Company selecting South Carolina for their new state-of-the-art assembly plant as they also move toward the future.  From an artistic standpoint, I was also blessed with these choices.  The strong blue notes in each of these still-life elements are strategically placed in a way to balance each other in the painting and they also perfectly reference the same strong blue note seen in the portrait of  Lt. Gov. Glenn McConnell, alongside which this portrait will hang.

As an admirer of Grand Manner and historical portraits, I depicted Senator Leatherman in a classic statesmanlike pose while standing in front of the raised bench and the gavel used to call to order the Senate, which represents his position of leadership and role as President Pro Tempore.  He is shown reaching out presenting the rendering of the new Ports Authority Terminal to the Senate and to the viewer in the foreground, thereby leading one’s eye right into the painting. These choices also allowed for me, as the artist, to correctly position the viewer as looking up towards the subject, which is especially important for the elevated position in the Senate gallery where this painting will hang.

Of special significance in the painting is the hilt of the official Sword of State, a symbol for the Senate of South Carolina, shown placed in a cradle on the Senate rostrum signifying that the Senate is in session as the electrically wired brass cradle makes contact with the metal sword forming a current that turns on the candelabra lights located on the bench.  Quite brilliant!

Also depicted in the portrait is the Senator’s study bible from his personal desk, his tie embroidered with the palmetto tree and crescent symbols from the State Flag, and his lapel pin showing the letters F and M intertwined, honoring his relationship with Francis Marion University.

And, of course, the cornerstone of the portrait is depicted in the lower left.  Part of the official Seal of the Senate is shown carved in wood with the latin words Dum Spiro Spero, “While I breathe, I hope”.  I would like to add to that a motto in Latin that I often reflect upon as a traditional portraitist , “Ars longa, vita brevis”, “Art is long, life is short”.  May this portrait faithfully honor for generations to come the many years of public service that Senator Leatherman has given, and continues to give, to the State of South Carolina.

The painting is life-size, oil on linen, 56 x 40 inches and will hang in the Senate Chamber of the State House of South Carolina. 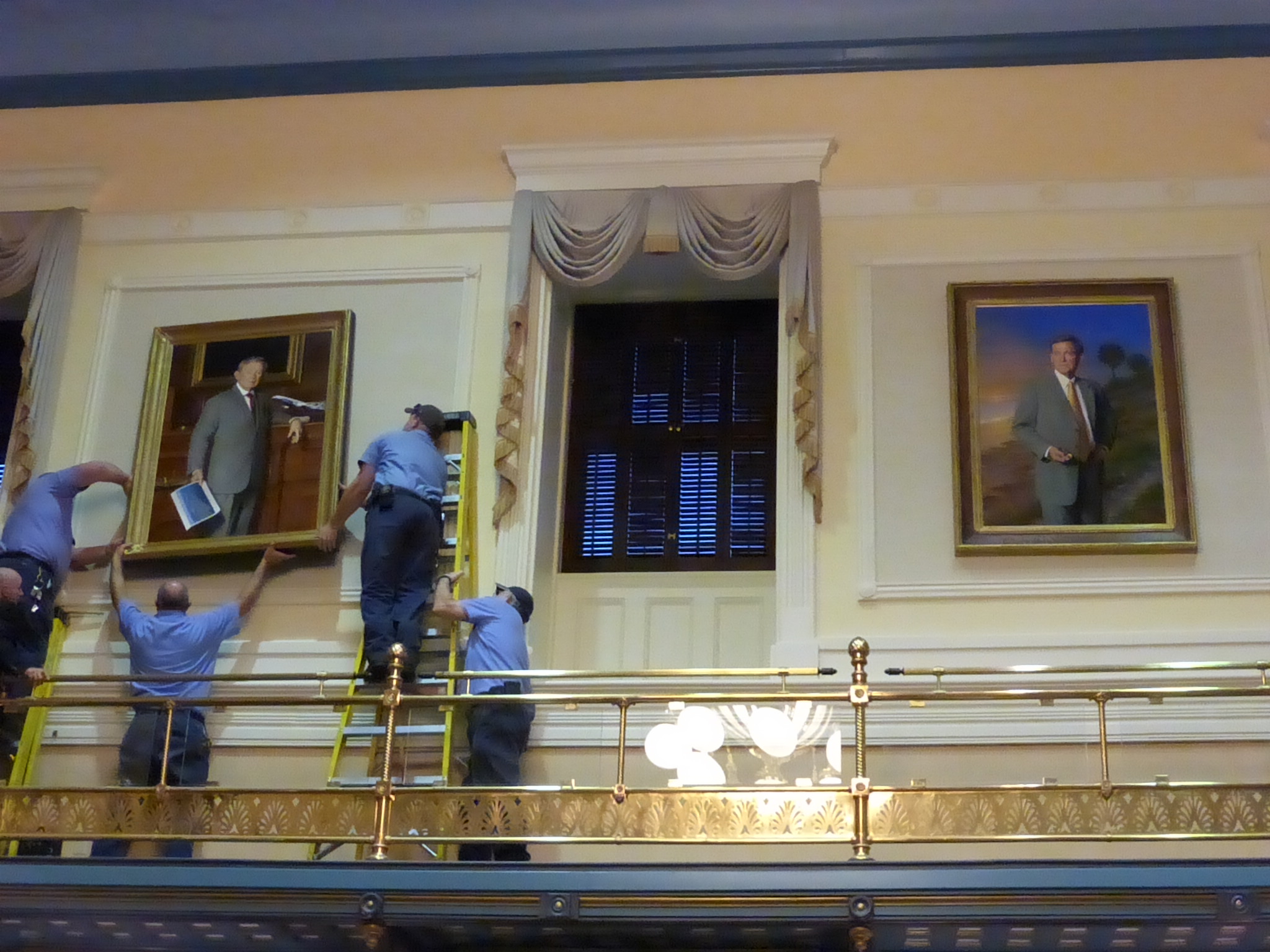