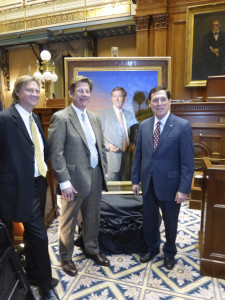 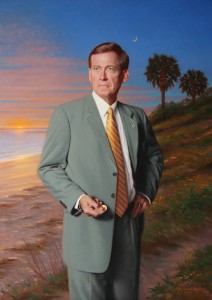 My unique conception for the portrait of Glenn McConnell evolved out of the knowledge that the Lt. Governor is from the Lowcountry of South Carolina and that he has had a special passion for South Carolina’s history – with his being especially invloved in the recovery, preservation and study of the Hunley submarine.

The Lt. Governor’s lifelong love of the Lowcountry and the outdoors prompted the idea of using a landscape setting as the backdrop for his figure in the portrait. I felt that a scene with palmetto trees would be particularly indicative of the Lowcountry as his home. My conception quickly grew to include the point of departure of the Hunley from Sullivan’s Island and the inclusion of the crescent moon to the side of the palmetto trees was used in representation of the motif of the SC state flag. In this way, the State of SC is identified as where he has served the public for so many years.  To me, this location for the portrait worked on many levels, so it was a matter of conceiving of a way to depict the figure in the golden light of the early evening where one would also realistically just begin to see the crescent moon during that same time of day.

The warm light of the sunset and the golden moment of the sun at the horizon were also used to add drama to the portrait and as a counterbalance to the rich blue of the sky.  While in Charleston and on Sullivan’s Island, I found inspiration near the southern tip of the island very near to the historical site of Fort Moultrie. The setting on this stretch of beach is significant, as it represents both the area from which the Hunley set sail as well as where the wreck was recovered. The palmetto trees were perfectly situated at this spot and the view of the setting sun over the Charleston peninsula seemed to create the perfect placement for the Lt. Governor.  Obviously, artistic license is always required to create a work of art, but the natural elements do, in reality, have the sun set over the Charleston skyline perfectly at the location depicted and the crescent moon is also seen many evenings over the skyline from this point. My depiction of the sunset in the portrait is also a metaphor for the Lt. Governor’s end of term in the Senate, which is where the painting will hang in recognition of him and his many years of service.  In addition, he is depicted standing directly on a pathway, the path that he has taken. It is a path that connects him to the past and to the future and speaks of his journey.

His pose is that of a statesman and a leader with an awareness and respect for the past, but with a strong vision for the future. He is looking off with a thoughtful expression that is one of both contemplation and determination.  He is standing directly in front of the Charleston skyline, as it has supported him, with the motif of the State to his side.  The mouth of the Charleston harbor or, as the Lt. Governor has stated, “the original gateway to South Carolina and its rich history”, is depicted beside him.

The careful lighting of the Lt. Governor was actually staged in my studio.  The two worlds and my studies from nature were then combined with a careful attention to lighting and color harmony. His suit was chosen as it has a color that was complimentary to the landscape scene and his golden tie was chosen with the deliberate awareness that it would echo the note of the setting sun and the unique gold coin from the Hunley which he would be holding.  Of all of the memorabilia which might have been employed to speak of the Lt. Governor’s passion for the Hunley submarine, the gold coin bent by a bullet from the civil war found on the remains of one of the lost sailors was deliberately chosen by him to be held in his hand.  It embodies many things: it is a physical relic of the shipwreck, a legitimate treasure and a piece of a romantic quest – but it is also, almost more than anything else, a representation of the human element. Its history speaks of accomplishment, struggle, survival, love, and loss and it represents a very moving personal story.  It represents the fact that we all have these stories. To know Lt. Gov. Glenn McConnell is to know that the coin also stands as a symbol of his fundamentally caring about the people of SC and that he hears their individual stories as he has served to represent them as both statesman and leader. 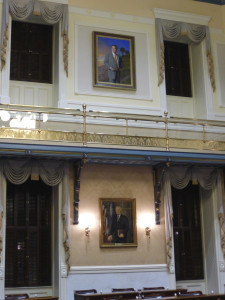 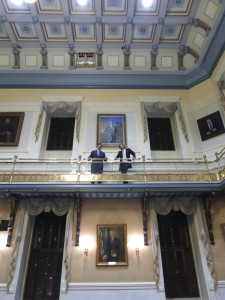