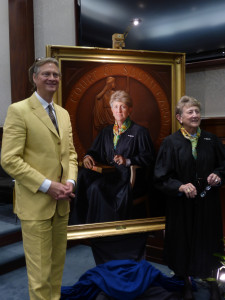 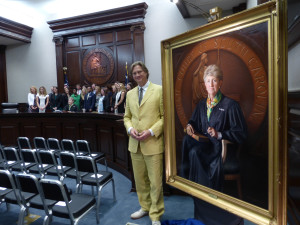 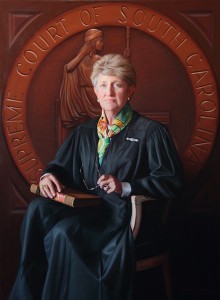 My conception for a portrait of Chief Justice Jean Toal took shape after having several meetings with both her and her colleague, Joan Assey. Together we enjoyed a thorough review of the South Carolina Supreme Court’s portrait collection of Justices. A vision for this new portrait quickly grew from there and I thought to create a dramatic statement about the strength, wisdom, and sense of personal presence necessary to have earned the distinction of being the first female ever to be elected Chief Justice of the Supreme Court of South Carolina.

We discussed various conceptions for the painting, but the idea to use the South Carolina Supreme Court Seal, as seen in the background of the portrait, came up immediately. The unique wooden seal depicted in the portrait is located behind the bench of the court. It is circular in shape and quite iconic as it surrounds Chief Justice Toal with its design featuring Lady Justice holding a scepter, a traditional symbol of sovereign authority, rather than a sword.  Lady Justice also sits with her blindfold raised, a departure from traditional imagery.  In this moment Lady Justice has rendered her judgment and is now lifting her blindfold to look out over the horizon as she announces her ruling.  In the portrait, Lady Justice is seen looking down upon Chief Justice Toal as she guides her with the wisdom and strength necessary for impartially defining and defending the law. All of the above creates a very powerful metaphor recording Chief Justice Toal’s important legacy.

The strong and decisive pose I chose for Chief Justice Toal is inspired by the pose that Michelangelo used in his masterful sculpture of Moses. As one of the greatest conveyers of law in all of history, Moses was depicted holding the tablets of the Ten Commandments under his right arm in a gesture and with expression that exhibited his full responsibility and the weight of the law. Correspondingly, Chief Justice Toal is depicted holding a volume of the South Carolina Law Report protectively in her right hand. The volume she holds, 1 Bay’s Law, contains the very first case in the Supreme Court’s history.

In her left hand, Chief Justice Toal holds her eyeglasses in contemplation. This gesture allows for her arms to finish the line of the circle created in the seal behind her, symbolically showing that she and the Supreme Court create closure on the law with their opinions and decisions. Her robes were painted and designed with equal deliberateness in order to create a sense of sculptural solidity as yet another way to describe the strength required for the position, as was my designing the pyramidal shape of her robed figure. These classical devices represent stability and suggest the integrity of the Court.

On a more personal note, Chief Justice Toal is seated in a chair sentimental to her family. While her expression is serious and intelligent in the portrait and intends to say that she handles her duties at the Court most thoughtfully, her scarf is a note of personal expression speaking of her most cheerful and lively nature as an individual.

Its spark of color and pattern also helps to bring the viewer’s eye immediately to the subject’s face and it offers color notes which are then echoed in her flesh, eyes, and hair color. She is also wearing several pieces of jewelry in the painting. On her right hand she is wearing her court ring and on her left hand she is wearing a ring that was an anniversary gift from her husband, Bill Toal.

Additionally, the diamond pin on her robe is an heirloom piece from her mother, Lilla Farrell Hoefer.  We also, rather playfully, chose to include the unique motif of a Carolina wren on a ladder within the pattern on her scarf in representation of the emblem of a society of local professional women, South Carolina Women Lawyers Association, of which she is a founder.

The finished portrait is life-size, oil on linen, 52 x 38 inches and will hang in the entry hall of the Supreme Court of South Carolina.