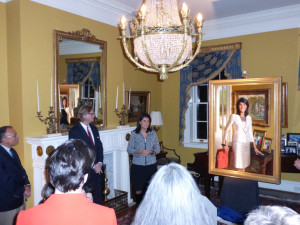 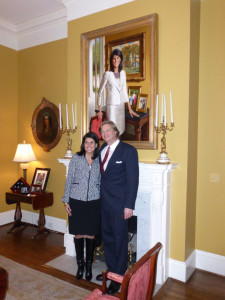 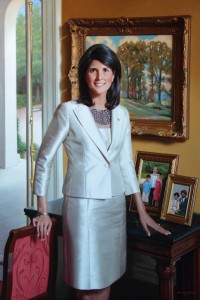 My conception for this official state portrait developed from the Governor’s wish for several things to be represented ~ including references to her family, to the outdoors, to Clemson University as her alma mater, and to the historic Governor’s Mansion of South Carolina as the setting for the portrait.

As the first female governor of South Carolina, a stately and elegant gesture was chosen with the Governor wearing the exact white silk suit worn in her televised address during the Republican National Convention in 2012.  With a keen eye, the viewer will also see that the Governor is wearing her favorite lapel pin depicting the dual flags, side by side, of The United States of America and the state of South Carolina.  As an artist and as a native of South Carolina, it was my hope that all of the choices made for this portrait would not merely convey an accurate likeness, but also the warmth, hospitality and strength of the Governor and of the State of South Carolina that she represents.

The portrait was staged in one of the front sitting rooms of the Governor’s Mansion with a view out into the expansive front gardens to her side, this echoing the strong light on her and her white suit as the center of interest.  The landscape painting depicted in the background is an additional outdoor reference and was painted by noted Columbia artist, Anna Heyward Taylor.  It was chosen for this portrait from the Mansion’s fine art collection due to its warm fall tones (the season that the sittings occurred) which harmonized beautifully with the rich golden wall color and several other objects chosen for the portrait.

Clemson University and education in South Carolina are referred to by the Governor wearing her class ring on her right pinky finger. Strength of family is also represented by the Governor’s wedding ring on her left hand pointing directly towards a photograph of her husband and children who are wearing, significantly, the colors of red, white, and blue. Her parents and their support are also honored in the portrait with a photograph of them placed directly next to that of the Governor’s husband and children.

The portrait is life-size, oil on linen, and measures 56 x 38 inches.  It will become a permanent part of the art collection displayed at the Governor’s Mansion where it will hang amongst numerous other portraits of Governors and prominent statesmen in South Carolina’s history.